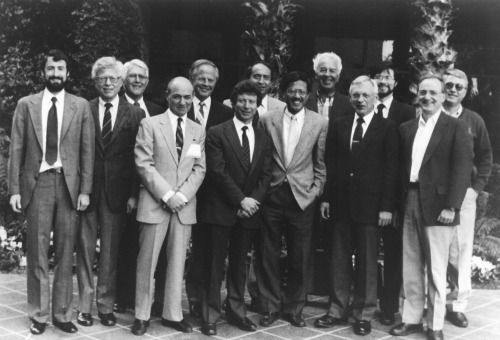 In 1989, 14 individuals met and formed the Society for Vascular Medicine and Biology. Dr. Jess Young was the first president. By 2000, SVMB had 255 members, astounding because there were not yet boards in vascular medicine. View the SVM Past Presidents page >>.

Shortly after the founding of SVMB, Drs. John Cooke and Victor Dzau wrote a powerful editorial in the Annals of International Medicine titled, "The time has come for vascular medicine." In this editorial, they said,

"Vascular medicine is beginning to take form as a small but growing cadre of internists in this country who have acquired special expertise in treating vascular disease." They noted that "these advances, although impressive, have lagged far behind the explosive growth in vascular biology... consequently, vascular disorders are being treated piecemeal by physicians from various backgrounds."

While cardiology fellowship programs are supposed to prepare their fellows for cardiovascular boards, most are long on the cardio and short on the vascular. In the late 1980s and early 1990s, a larger number of cardiologists became interested in peripheral vascular diseases, especially as it related to interventional procedures for these patients.

Courses abounded teaching others "the how to of peripheral intervention." In the early years, many of the leaders in this area were very well trained in the technical aspects of endovascular therapy but less knowledgeable in the natural history, non-invasive evaluation and medical treatment of these disorders.

The time is long overdue to recognize the fact that vascular medicine is more than just interventional therapy, imaging or medical care of the vascular surgical patient. Without a thorough understand of the etiology, pathophysiology and natural history of the disease, as well as a knowledge of medical, surgical and interventional technologies, care for the patient with peripheral vascular disease will be less than optimal. The notion that a cardiologist who is trained in invasive cardiac technology can apply these same procedures to the peripheral vasculature is a misconception.